Model railroading can be a lot more than an escape from everyday life. It can be a method of understanding and exploring much more challenging situations and conditions of our world. A rarely taken trajectory in modeling is the depiction of dystopic scenes of dark realities.

I came across the first of a handful of darker dioramas some years ago. It is the work of a Yale architecture student (probably graduated by now)  Peter Feigenbaum in his Trainset Ghetto installation. Plenty of graffiti and trash in a rough contemporary urban scene. The lack of scale figures makes it even more foreboding and bleak.
What do we get from modeling a gritty, non-romantic area of urban blight? Maybe it has to do with a deeper, more real, feeling of reality. The dark and ugly are often more vivid and touching events in our own lives that perhaps provoke much more emotional stimulation than the joyous occasions. This is definitely not a normal trajectory for modelers, but I suggest that it is just as satisfying, if not more so, than modeling the sentimental, happy, idyllic scenes of our childhood or romantic notions of better times past that are more fiction than fact. Peter's dirty reality is not the only one I've stumbled upon that plucks at the grim emotions of uncomfortable situations.

Thomas Doyle is another artist who uses scale modeling as his medium to explore difficult and transformational events that are often less than happy scenes. His artist's statement indicates he is after those deeper emotional moments.


My work mines the debris of memory through the creation of intricate worlds sculpted in 1:43 scale and smaller. Often sealed under glass, the works depict the remnants of things past—whether major, transformational experiences, or the quieter moments that resonate loudly throughout a life. In much the way the mind recalls events through the fog of time, the works distort reality through a warped and dreamlike lens. 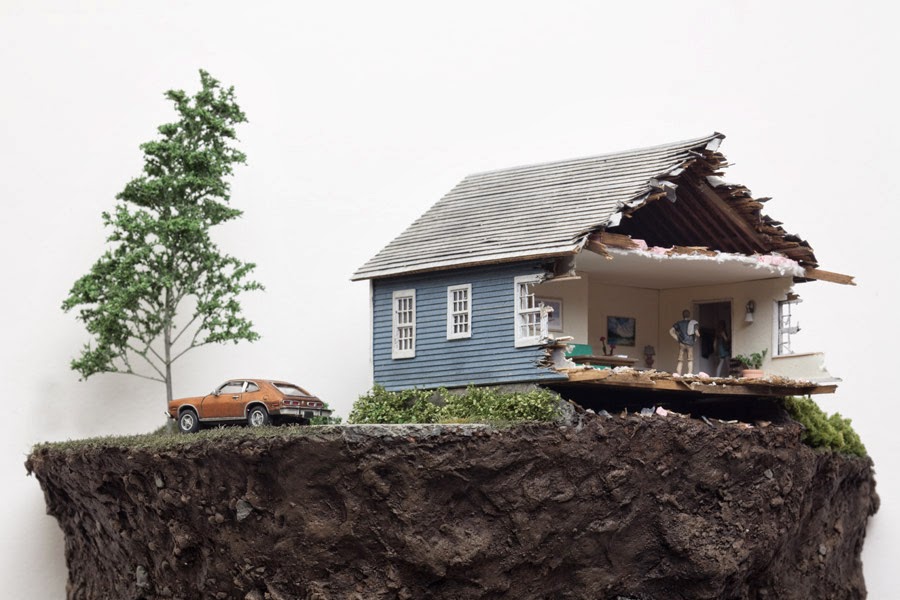 Another artist James Cauty is dabbling in the scale model railroading medium shows us an extended crime scene. Police, investigators and a general environment of mayhem poke at the establishment through nicely detailed work of architectural modelers. He wants us to consider our relationship to authority in a large installation. The 'layout' is,

A description of the installation:

Thousands of police swarm over a scorched landscape tattered and torn by rioting and looting, every window in every building is smashed, vehicles are overturned, bridges and roads destroyed, power pylons are down, a burned-out church still smoulders. Above this post-mayhem scene of destruction, helicopters shine their searchlights on the battered landscape. Above the helicopters, a train rumbles past...

These art works are designed to communicate a theme or some sort of meaning beyond just recreating a part of the world. They are all dark in some way, whether through the topic, the execution or the exploration of uncanny emotions. They are all by artists and not modelers. While everything we build communicates about the conditions of the building process, intentional, overt and explicit communication through models is what transforms the pursuit from a pastime to an art form (or a design form).

The above examples are nominally works of art simply for the fact that they were produced by artists for art galleries. What happens if model railroaders build layouts in their homes that create a recognizable message about society?  Are they even modelers anymore, and are they now, instead, artists? A quick search of the Internet reveals on the UK N Gauge Forum that this approach is being taken up by at least one modeler.

The forum participant, Mr Grumpy, is attempting to tap into the dystopian visions offered in such movies as The Matrix, Blade Runner and 1984. His N scale modeling is intended to portray the "divide between rich and poor" with skyscrapers built on "crumbling slums below." His layout is still in construction, but his exemplary video from Final Fantasy VII indicates it is definitely headed towards gloomy futurism:

Off the top of my head for my own Hoboken Shore layout, I have a couple of items to possibly explore grittier sides of the rough Hoboken waterfront. One is at Bethlehem Steel during the union strike of 1947 (as seen in the photo below) when almost 42,000 workers on the east coast paralyzed the ship building yards.

Also of note are the extreme signs of poverty found in Hoboken at the time due to graft and corruption of Mayor McFeeley's regime. Garbage collection was suspended at a point as political retaliation, and the large numbers of out of work immigrant merchant marines and large population of poor children roamed aimlessly about the streets. Almost every other building seemed to be vacant at the time, with squatters inhabiting half-crumbled structures. An article appeared in the US Camera journal (in the collection of Hoboken Historical Museum web site) that illustrates the dire situation of the city in the 1940s. The entire article is interesting and posted in its entirety in their online collections.

And equally ripe for dystopic modeling is the tough harbor life as seen in On the Waterfront with Marlon Brando, where apparently there were lots of longshoremen beating up each other. Far from the cute or funny scenes of overturned apple carts or skinny dippers normally found in a model railroad, I am contemplating these dark depictions to accurately portray how awful life was in this area of New York Harbor. It would be misleading not to model these scenes that were so important to the culture and environment in which the Hoboken Shore Railroad operated during the 40s and 50s. Certainly not the glamour and polish found in streamline passenger trains and glorious stations one more often sees in layouts and railroad press, but I wish to present a rather dirty, poignant slice of a hard everyday existence of which the railroad was a part.
This is definitely an underrepresented niche in the hobby that occurs in isolated instances in a few layouts. I think both dark modeling and the broader genre of artistic modeling bear some more thought in the pages of this blog at some point later. Meanwhile, there are a couple of recent examples of prototype opportunities to explore darker railroading topics.

A common occurrence these days are (old) tank cars from the Bakken Oil Fields making their way precariously through communities across North America while pipeline construction is catching up to the new oil shale deposit production. This catastrophe happened in Lac-Mégantic, Quebec, Canada recently, when a train with 72 tankers full of crude oil is parked uphill in Nantes, and through a series of unfortunate events, ends up 10 kilometers away exploding and burning in Lac-Mégantic. 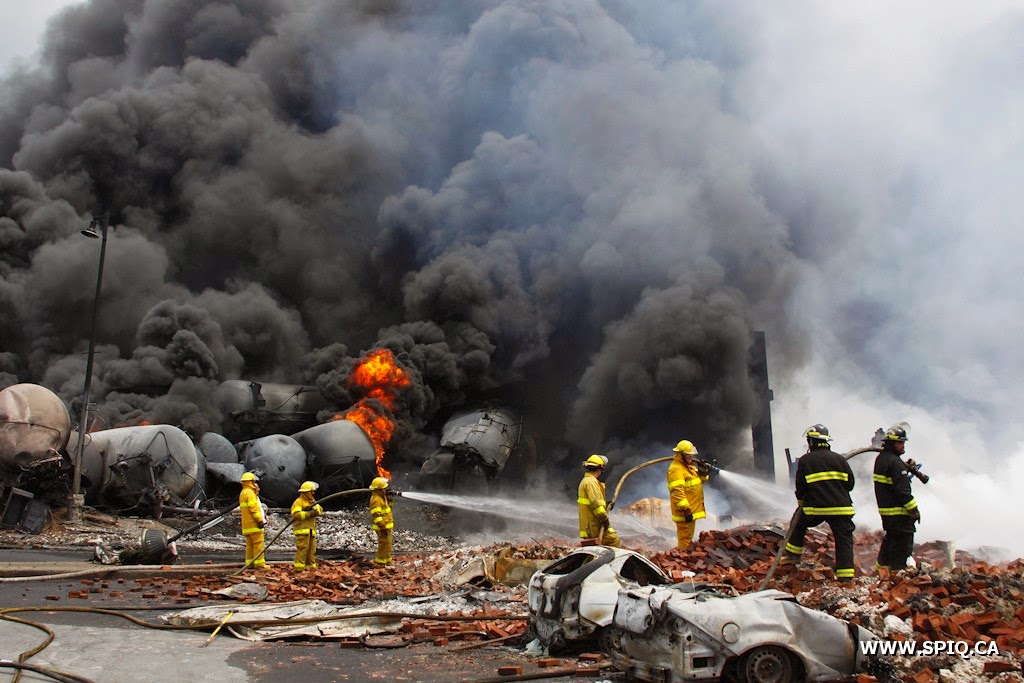 I have seen plenty of firefighters and fire trucks on layouts fighting car or building fires, but I don't recall having seen a model of a railroad accident. (Feel free to point me towards any examples in the comments section!) The discussion of dark layout subjects is simply to illustrate the idea that not all layouts have to glamorize what is in reality the very dirty, rough and dangerous business of railroading. 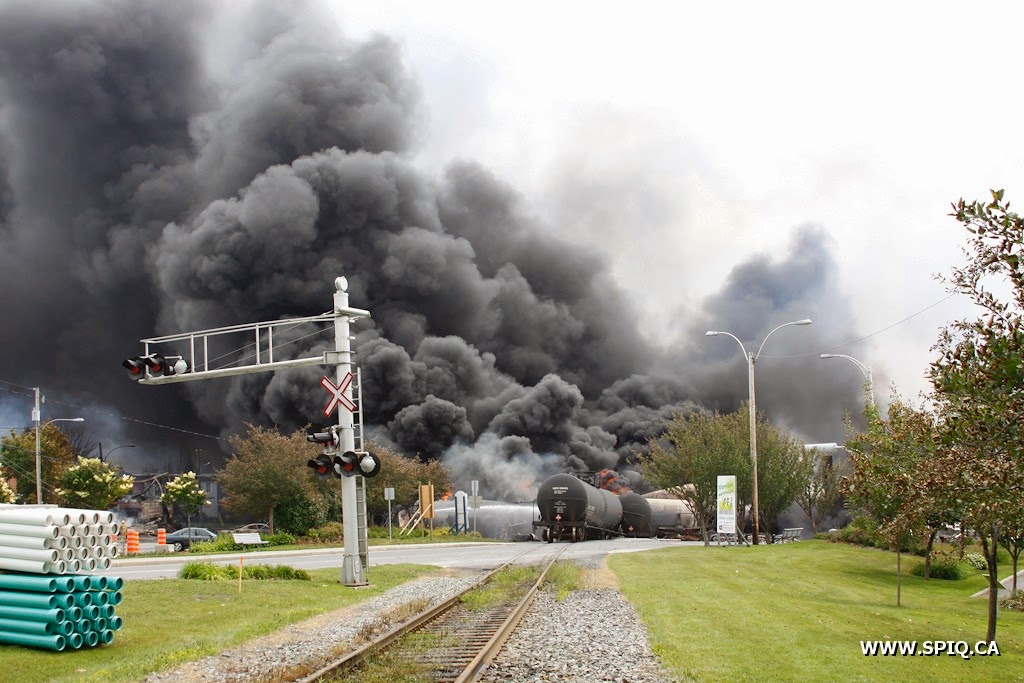 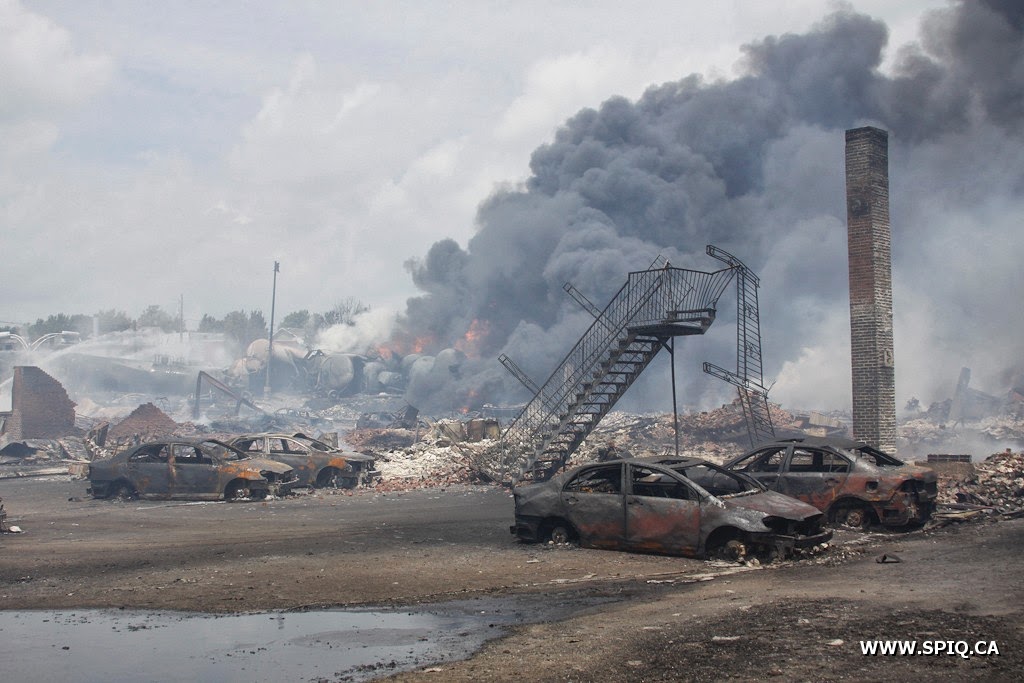 Another instance of a prototype event that seems to beg to be modeled for a contest model or RPM meet. From an email circulating through the railroad community:


CN train that hit a log truck on the Redditt sub (between Winnipeg MB and Sioux Lookout ON) at Sunstrum, ON (mile 38). Lead unit was the 5146 a GMDL SD40. Seeing the truck on the crossing before hitting it with the train, the engineer hit the deck below the window level and the head end brakeman ducked down behind the wall and door under the middle windows, that leads down to the nose of the engine. Both made it out alive. There was glass everywhere, the pulp logs loaded cross wise on the truck, penetrated into the cab including through the number boards. 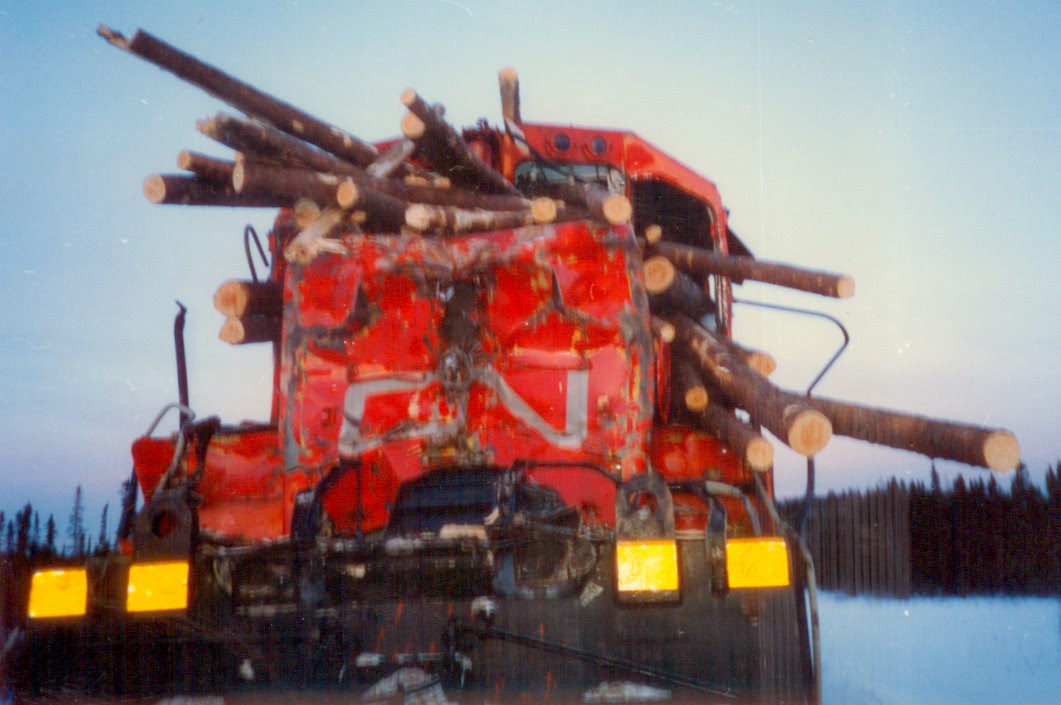 Quite an amazing image, and equally amazing the crew wasn't killed. I haven't seen anyone tackle a modeling project such as this. 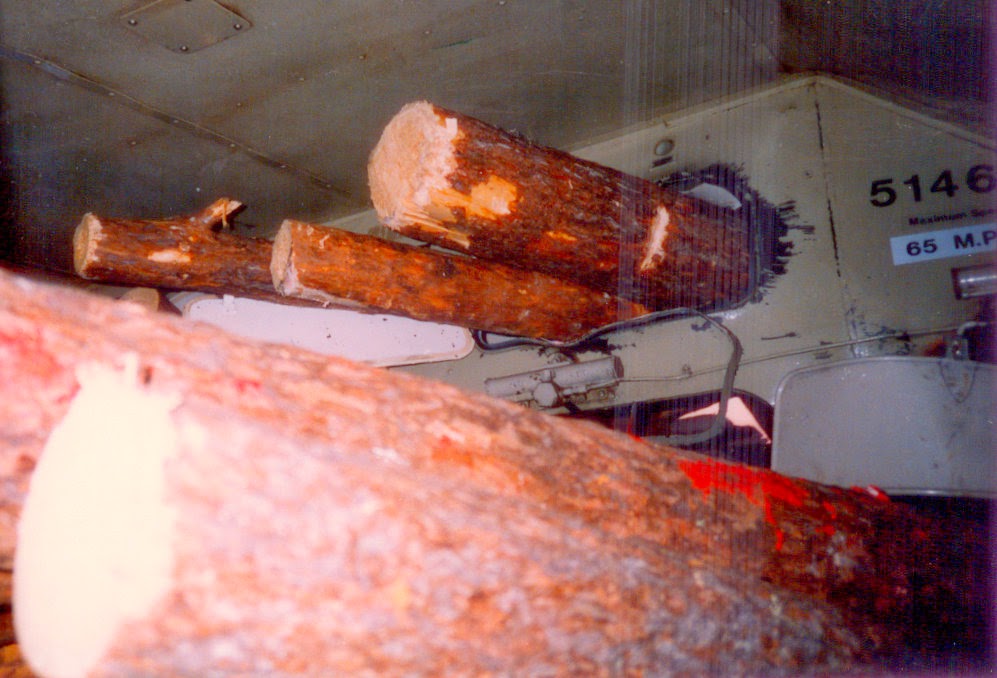 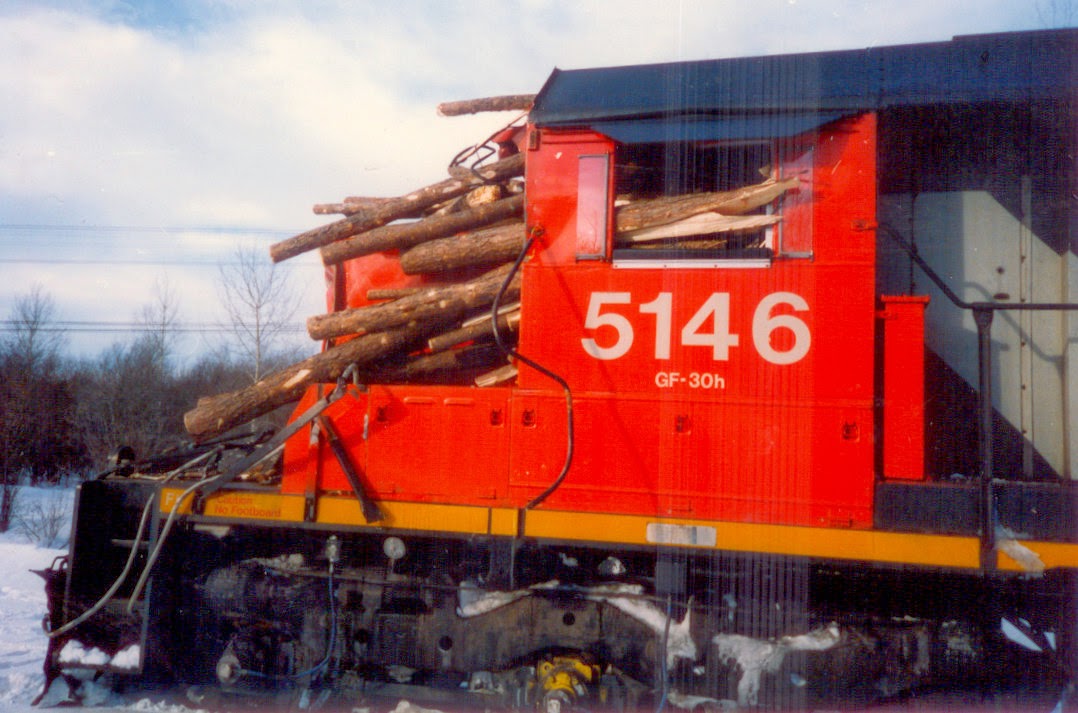 Why don't we see more modeling of disasters and unpleasantness? I think one answer is rather simple and straightforward: why would a 'normal' modeler want to spend a lot of time ruminating on a layout that was dystopic? That certainly couldn't be a happy retreat from the hassles and tragedies of everyday life, which is a big reason to have hobbies in the first place. I think that there is, however, satisfaction and respite in creating more challenging layouts with unpleasant or uncomfortable topics, and there is an equal sense of recreation to that pursuit.

There are also benefits for the final product of the layout itself, whether it is dystopic, idyllic or somewhere in between, if we approach creation of it from a more considered perspective of an artist or designer.

I believe that layouts that have a carefully conceived theme or thesis statement are generally better off than those that do not. In more general terms, and with dark and grittiness aside, there is a lot of room for layouts having identifiable themes and theses to be less craft-focused and more artistically focused. There are a lot of distinct situations available for such modeling found in many varied kinds of prototypes.

Getting the look of a railroad accurate is a technical pursuit, but getting the feel of the railroad is a more artistic endeavor. To be thought about more is why this more artistic approach would be beneficial, and how a rigorous thesis statement could help make decisions and provide productive focus for the modeler. It has everything to do with the process producing a better outcome. Simply put, it is identifying what effect you are trying to achieve beyond making a model look like its real life prototype. What is your layout's thesis statement? This may not be part of your current process, but it deserves a little consideration.

Speaking of process, I see that the glue is dry, so I need to get back to laying track.
Posted by Riley at 10:02 AM