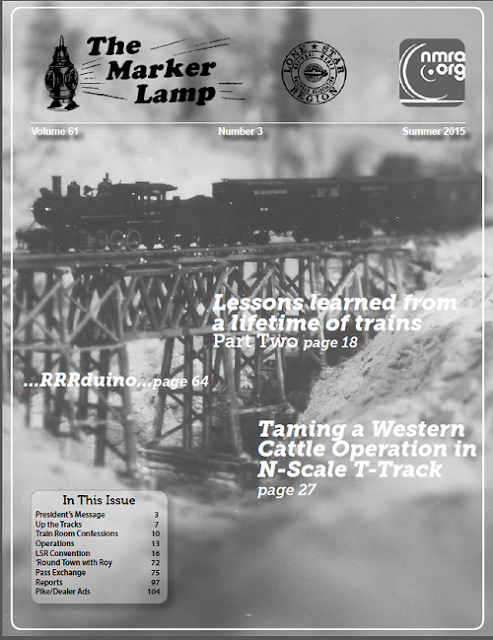 Because of a couple of backlogged articles and meeting minutes, etc., the latest ML I was able to put together is over one hundred pages long. Don't expect this every quarter, but the fantastic work of Associate Editors Bob Batson and Speed Muller along with frequent contributors like Blake Bogs and Jeff Palmer and regular contributors Roy Stockard, Duane Richardson and Peter Kazmir are making this happen. Drop them a line and say thanks!

I recently visited Steve Nelson's excellent recreation of his boyhood corner of Missouri in HO scale. The following description is what we use for our annual layout tour materials and gives a good overview of what Steve is creating.

The modeled portion of the railroad is from the Rocheport Tunnel east of Franklin, MO to Parsons, Kansas. The layout will closely follow the MKT prototype track plan and operating practices in the region during the fall of 1966. The layout is linear with double-ended staging yards. The bench work is 100% complete and 240 feet of mainline track and 220 feet of yard track have been laid. Scenery construction is 25% complete including the Rocheport Tunnel, the Missouri River Bluffs covered with 900 trees, a corn field with 4500 individual stalks, and a scratch built model of the pony truss bridge at the east side Franklin, MO. Trains are now running on 240 feet of the main line track which includes crossing the mock-up of the large Booneville Lift Span Bridge over the Missouri River. Recent additions: 1.5 (scale) acres of soybeans and a working drive in theater.


I hadn't been out to Steve's in several years and there has been a lot of progress. A good amount of scenery is in, and it convinces me that it will be a fantastically crafted and executed landscape for running trains. Steve is a master at trees, which is fortunate because he will have thousands of them, but more so, he is becoming a master at recreating exquisite realistic features in the landscape.

We talked about his approach to modeling scenery, and we mused that usually modelers represent features in the landscape, but Steve's approach is to recreate features, which leads to a more accurate and convincing presentation. I might attribute this approach to Steve's engineering background, which shows a tendency towards attention to detail, intolerance of inaccuracy, and a matter-of-fact approach of modeling exactly the way something is built or looks. I'm very excited by his attention to this difference. As he gave me the grand tour, I saw examples of his methodical modeling in every scene.

By the end of my tour, I was completely spoiled by the realism and attention to detail already on Steve's layout. He is about half way done with the scenery, but it already feels like a finished layout because the scenes are so complete. I will poke Steve a little here because he should have been operating already, but he is afraid that will bring his modeling to a halt. There is only so much modeling time to slice up, and I don't blame him for wanting to keep the momentum going. I think he may find, though, that operating is going to beg him to make some track plan changes and force some scenery redoing. Not a problem, though, as Steve routinely will tear out a section of scenery if it isn't good enough. Anything he does tear up for track realignment will quickly be put back together, and I bet it will be even better than what was already there.

I am inspired by Steve's work to recreate and not just to represent the landscape, trains and operating procedures of a very specific place and time in railroading history. His research and attention to detail are very good examples of modeling to engage. The effort and care he expends in trying to understand how things work and relate to each other add another deep layer of modeling that is indicated by visual evidence in great looking models. On Steve's layout, beauty is not truth, but it is often a precursor to it.

On the Relationship of CVs, Thesis statements, and Place

A recent long email thread between modelers in Kansas City and Austin has centered around CV settings for realistic operation of locomotives. The concern has been to accurately set momentum, braking, and sounds properly to achieve the feeling of running an actual locomotive. This feeds directly into a running conversation among several of my modeling friends about the central organizing principle of layouts, or the thesis statement, that governs decisions about the construction and operation of a layout. Like anything in life, I believe having a central conceptual basis, or reason, for what you are doing with your layout makes your endeavor more cohesive, focused and helps it communicate your vision and intent more clearly.

I will concede that a majority of modelers may believe that a rigorous conceptual basis for a model railroad takes the fun out of the pursuit, because the enjoyment comes from doing whatever seems like fun at the moment. I can not stress enough that I have no problem with spontaneity and undirected play at all as a fun way to practice model railroading. (See my Fall 2013 LSR Marker Lamp editorial in vol 59, number 4 where I talk about modeling to escape versus modeling to engage.) But, suspend your disbelief for a moment if you think that modeling to engage sounds too much like work, and please think of it as just getting really involved in playing.

A huge part of any game and even undirected play involves a set of rules, or constraints, that make the game more fun for everyone, even if you are the only one playing, because how are you going to know what you are doing or if you are doing it well or not without rules? For me, having that central organizing principle or thesis statement is rule number one. Without knowing what I am setting out to do, how will I know if I do it or not? There may be several types of theses possible, but I would say that they are all sub categories of a very large catch-all bucket of categories that involve the idea and communication of the qualities of place.

On my layout, I am still developing my thesis, but the trajectory has something to do with conveying identity and the relationship of customer and railroad. Being a short line railroad, the Hoboken Shore had intimate interaction on a daily basis with its customers. My questions for this are, how could one model this closeness, and how can personalities come into play? On the Waterfront, which was filmed along the HBS right of way, provides an excellent example of the turmoil and roughness of the moment in time of the environment surrounding the HBS. I'd like my layout to impart some sort of understanding of this, and what it may have been like to work on a railroad in that particular place. Because of this trajectory, it becomes necessary to focus on the operator as individual within the context of 1950s Hoboken.

The HBS was already waning on the heels of its busiest time during WWII. There must have been a malaise settling on the town and railroad as things were falling apart all over the Mile Square City. The mayor owned the local garbage collection company, and when decisions weren't made to his satisfaction, he refused to pick up trash for several weeks until the decisions were reversed. Graft, corruption, and general New Jersey politics led to empty buildings, dirty, malnourished children roaming the streets, and general hard times while the rest of the country was enjoying a post-war boom. It was so bad, that the mayor enacted a law that made it illegal to photograph the city during this time.

Capturing the idea of a place is a topic of an excellent blog post entitled "Power of Place" I read recently from Mike Cougill at his OST Publications blog. In it he explores the notions of place and the challenges of modeling them on a layout. He says,"in modeling, we give scant notice to how the railroad and community grew together. We only give a cursory acknowledgment of how the railroad fits the landscape and in turn, is shaped by it." We do tend to become fixated on the stuff and techniques of the layout instead of the overall effect we are trying to achieve. A 'can't see the forest for the trees' sort of thing, but I believe that creating an idea of place is the central reason behind creating any layout.

The place of Hoboken in 1959 is what I am modeling, so what does locomotive sound have to do with this? Simply and directly, the pace of operation for switching multiple industries in an urban setting is necessarily slow, so I want to make operation about the little things that were apart of the everyday movement of goods and products around the waterfront. This was what the railroad crews had, everyday things in small quantities that made up their entire lives. No varnish whizzing by at speed, no thundering Big Boys belching steam, nobody to really notice what was going on except for the people they dealt with everyday at the coffee factory, the shipyard, and the piers. The world was a small one connected to the globe, and it was these individual sounds that made up the ebb and flow of the aural scenery.

It is easy to get sucked into tweaking CV settings on a locomotive just for the sake of getting the sound right. My driving interest, though, is to provide user feedback that makes prototypical operation easier and more enjoyable for the operator on my layout. Keeping this in mind while performing a seemingly isolated task of CV setting is important to me.

So hearing the small, but can-do nature of the revving of a 44-tonner before it moves is modeling the character and the reality of the Hoboken Shore Railroad. It wasn't glamorous, it wasn't pretty, but it was specific and part of the everyday experience of the individuals of the railroad, and that's important in supporting the thesis about the place that I am recreating on my layout. This small sound detail directly helps the central conceptual basis for my layout to communicate the particular place of Hoboken, NJ and how the railroad fit into it. For me, this makes for loads of fun, even though I am focused, rigorous and deliberate in my play.

For a great example of a strong, central thesis, see the layout of Jim Senese of Tulsa, OK. He has a clear intent for operators explore the interaction of multiple railroads with differing personalities on his "Kansas City Terminal RR" layout in Model Railroad Planning 1998.

I think place is a great topic for further exploration and conversation. I'd like to hear from you if you know of modelers who make place an important part of their layout.

This first appeared in Vol 61, Number 1 of the Marker Lamp.

Brakeman on the Cat Mountain and Santa Fe