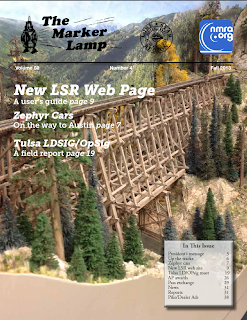 The latest Marker Lamp for Fall 2013 is posted on the Lone Star Region web site. In it I have a couple of items, one of them is my editorial reprinted here about two kinds of model railroaders:

A long running discussion with a friend of mine, Gerry Fitzgerald (a C&O modeler in Virginia), produced a crystallized thought for me this week. Our discussion has involved many people over the course of several years dating back to an article he wrote in issue No.36 of the Layout Design Journal on modeling Jim Crow railroading.

These differences in approach to the hobby are often the cause for tension in general model railroading forums amongst those who feel threatened by ‘the other.’ We name our others as rivet counters, roundy-rounders, static modelers, freelancers, prototype modelers, etc.

As in the world in general, there is plenty of room for different pursuits in modeling railroads, and it is unproductive to discount any of them simply because one does not subscribe to the same pursuit. In the end, we are all some form of model railroader.

This is an issue of concern at the national level where groups have splintered from the NMRA for feeling like they don’t belong, and there is a concerted effort to try to make them feel more welcome as part of a general membership focus. But what is at the heart of this tension? I think it comes down to the differences in the way people pursue the hobby.

One way to categorize these pursuits is into two basic groups. I think of as those who are modeling to escape and those who are modeling to engage. Both are equally important and relevant to having fun, and I, like most, enjoy and deliberately practice varying levels of both methods in my modeling time. Modeling to escape and modeling to engage are both recreational by definition as the activities are generally different than those one pursues in everyday life. But both kinds of pursuits of modeling are similar. They are both closely linked forms of nostalgia.

I believe most use the term nostalgia to mean a ‘general interest in the past’, but there are different connotations associated with nostalgia (wikipedia). The first type, which aligns with modeling to escape, includes an element of sentimental longing for a better history that did not actually exist.

Modeling to escape is about removal of things that remind, or are too similar to undesirable everyday conditions - especially those things which one finds disturbing, taxing or unpleasant. One refreshes or re-creates oneself through removal (or distancing) oneself from the everyday.

I completely sympathize with, accept and applaud those who do not wish to model things they find disturbing, taxing or unpleasant in the pursuit of re-creating oneself. It is simply unproductive recreation for them to do so.

This restorative practice is meant to do exactly what recreation is all about: feeling better. This is accomplished by fulfilling the wish to return to what one believes was a better time. Of course, there is nothing wrong with feeling better about yourself and your world. It does not, however, allow you to accurately understand the world any more than you already do.

If your interests are in understanding, then one must practice the second form, reflective nostalgia, which suggests a more active and critical participation with history that leads to a more accurate reflection of how things really were rather than how we desire them to have been. This form aligns with what I call modeling to engage.

Modeling to engage is about trying to get as close to the truth and to reality as possible in order to feel what the time and place were actually like. Even though it is not about feeling good about the past, it is still about feeling connected to it. It is, however, equally re-creative, and is not a lessor nor a higher form of the hobby. It is simply a different form of enjoyment. It does not negate nor threaten modeling to escape, and, in fact, modeling to engage may be a subset of escape or a more particular form of it.

Some resist modeling to engage and believe that deliberate research, planning and ‘rivet-counting’ is a waste of time and not fun, but very deliberate and rigorous pursuits are equally re-creative such as sport, art, music, etc. The ‘buzz’ enjoyed from modeling to engage comes from the accomplishment of gaining knowledge and the skill to communicate that knowledge through models, which connects us empathetically to our subject of interest. The more rigor put into it, the more buzz one gets in return. The rigor involved in the engagement of learning about a subject requires effort that many may find ‘too much like work’, while others find it very satisfying exactly because of the rigor.

I tend to like prototypical model railroad operation and accurate, scratchbuilt prototypical modeling, but I also very much enjoy “just running trains”, putting together a manufactured kit, or buying something just because I like it.

In my view, there is room enough for escape and engagement, and we should support each other in whatever way helps us to enjoy the hobby on our own terms. Making a fellow model railroader feel bad about their kind of pursuit and disenfranchised from the hobby is simply the wrong thing to do.