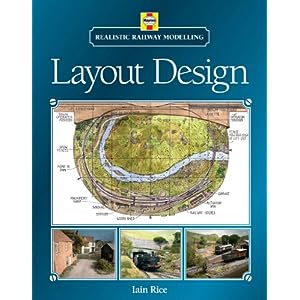 The first book in a new series by J H Haynes & Co, Ltd, Realistic Railway Modeling, is Layout Design (2010) which is as much a slice of philosophy as it is a hobby guide book. Written by prolific British author Iain Rice, the tone and flow of this book is informal and smart, and promotes a particular approach to modeling that is informed by the author's artistic schooling.

This 176 page hardback retails for $34.95/£25.00 and is presented in a clean, color-coded scheme with sans serif typeface that moves from overall philosophy and approach to the hobby through "Boring Bits" and the "Things You Can't Ignore" chapters to the heart of Rice's argument in the "Visual Design and Presentation" chapter. Only after all these have been rightfully considered along with prototype research, logistics and operational considerations does he address the actual plan for your layout. He notes in his "Preliminaries" chapter that the track plan has traditionally been held as "the only blueprint needed to build a model railway."

Not so, as Rice argues for a more complete and holistic method of design that resolves all issues of the layout from the perspective of finished product. He puts forth that design considerations must involve viewing perspectives, operational desires, visual harmony and proportion as well as the nuts and bolts of the construction. The artistic elements are where he places emphasis, and the rest of the pieces are supporting cast to achieve his goal of a realistic model railway - including the track plan. The effect of the layout as a whole is the prime motivator.

I could not agree more with Mr Rice about designing holistically. Too many times I have consulted with clients and friends over track plans. Too many times I have tried to get them to think in these holistic terms, only to be humored for a few minutes before turning back to the track plan as the central organizing principle of a layout. It could be that people are thinking of the track plan as the plan view for the layout. I believe it was Mies van der Rohe who promoted the primacy of the plan as a generator for good architecture, but he was after different overall effect than a model railroader.

Mies was organizing space to be experienced from within. Adjacencies, relationships, proportionality and materiality were key ingredients for the experience of an inhabitant. While all of these ingredients are also key in the development of a model railroad, the viewpoint of the experience is almost completely exterior to the space itself. It is much more akin to a painting or sculpture than a work of architecture. The arrangement of ingredients must be thought of in terms of the gaze and not the experience of being in a three dimensional space. So in model railroading, the track plan must be considered an ingredient, too, and not the primary organizing element. The better method of organizing space in a model railroad must be in something more like the perspectival vignette sketch that allows for the understanding of the visual relationships of the different elements in the layout.

It is not surprising, then, that Rice's main graphic tool for developing and communicating his layout designs is the perspective sketch. His signature sketches - usually rendered in color -  allow him to consider the placement of buildings, roads, landscape, backscene, and tracks as an entire composition for a holistic design approach.

In the "Visual Design and Presentation" chapter, he shows that this sketching method for designing affords consideration of proportion, composition, viewing angles, scene division and visual balance. It is also a way to test out "sizes, mass and scale of objects and their placement in the scene." He suggests some basic techniques for this such as using the Golden Mean (or Golden Section) to find the appropriate boundary areas for locating things. All of this is to support his main goal, which he sets out in the introduction: to create a believable and realistic ambience of a prototype railway.

Throughout the book, Rice includes many great devices for framing how one should think about layout creation by setting of parameters. His first parameter is to set a general approach of "compromise and deception" to achieve the desired ambience. Then, in order to create this ambience, one must nail down underlying motivations to arrive at a guiding mission statement with which to evaluate all decisions. Using this approach, a layout practically designs itself - all you have to do is figure out the constraints and goals you have, then stick to them throughout all the rest of the decisions!

He explicitly addresses this in the chapter "Rationales, Lists and Logistics". He suggests using lists to help organize your thoughts and prioritize desires. Ironically, one of the few things I find missing from the book is a list of things to do while designing a layout as a way of condensing the whole book into an actionable guide for the reader. I would suggest making this list for oneself, starting with why you are even building a layout to begin with.

I very much enjoyed reading Mr Rice's overall look at designing a layout. It is an easy read and well illustrated, presented and produced, and I'm looking forward to seeing more of this series. This is a great book, especially for the beginner who is wondering what model railway building is all about. As an intermediate or advanced layout designer, this can help clarify what you may already do, but give you more control over the process.

What I am left with is the interesting contrast in approach to modeling between Rice and many of the mainstream American model railroading authors. This is something that may be worth thinking about in the near future.