I've taken a stab at developing my Dynamos idea for the Erie Railroad from Jersey City to Chicago milepost by milepost. This first layout uses some standard modules developed from looking at the track arrangement charts for the Erie arranged to replicate the operating characteristics of the railroad instead of the physical characteristics of actual places. The first layout models the operations between MP 0 and MP 16.
An article I am working on explains further:


How to Model More Railroad than Your Room Can Hold

ODE: Operational Design Element. A typologically identifiable portion of a model railroad layout that is linked to the operation of the layout. A section of a model railroad that has a discrete (or particular combination of) operating elements such as an interchange, siding, yard (or separate yard element), passenger station, industry spur or spot. Can also be used for type of landmark or scenery element such as a bridge, tunnel, cut, roadway or other part of the natural or built environment that affects operations.

History
The hobby of model railroading has continually advanced in the areas of craft, manufacturing and technology since modeling became distinguishable from simple toy train activities in the early part of the twentieth century. For some hobbyists, the reason for modeling itself also has continued to evolve over the course of the last 100 years from simply being a quest for more accurate models and better looking scenery to modeling the railroad operations and prototype practices as more than a model of a railroad to more of a simulation of a railroad. 1

Layout planning has very directly been affected by this evolution in approach to the hobby. Most recently, forward-thinking ideas of David Barrow and Tony Koester have had a great influence on those of us who are striving for clarity, realism and operations-oriented model railroading. Two of those ideas, the domino benchwork construction and planning method of David Barrow and the Layout Design Element, or LDE, of Tony Koester have both shaped current discourse of layout planners and are particularly interested in the simulation, or game of model railroading.

David Barrow used the term “domino” for a benchwork construction method in an article for Model Railroader magazine in 1995 and gives credit for the term to Bruce Goehmann who wrote about “domino” planning for traction layouts in a MR article in October, 1985. [Diagram XX] Related to Swiss architect Le Corbusier’s Maison-Domino, a basic building prototype for mass production housing with free-standing pillars and rigid floors that privileged modularity and clarity in architectural form and construction, the effect of domino planning on model railroading has been significant in that it reinforces the around-the-room, or shelf style layout that is sincere (the train moves through each scene only once maintaining the same direction).

What I take from the domino method is the ability to rearrange standard modules in the manner of NTrak or FreeMo in a home layout setting with a standardize dimensional relationship (such as the convenient 2’x4’ module Barrow frequently uses). In addition, Barrow, among others like Mike O'Brien and Tom Pearson, have been a part of a larger discussion about minimal model railroading (to the ire of many modelers who have said to Barrow, "that isn't model railroading"). The idea that photographs of a place or industry can be used instead of modeling a structure or scenery in three dimensions suffices for the purposes of modeling operations.

Bare plywood and Code 100 rail aren't even noticed if one is really involved in the operations aspects of a layout. David has tested this on us operators by replacing code 83 rail with code 100 rail on a section of mainline and then asking us if we noticed in the post-op debriefing session. Nobody did, because we were all intent on what we were doing with our trains and couldn't care less about the rail size. This changes, of course, when there is no operation happening and one is only railfanning. This boils down to which master you would like to serve: operation modeling or physical modeling.

The idea of Tony Koester’s LDE or Layout Design Element is to represent a prototype location as closely as possible in a modeled portion of the layout. [Diagram XX] His definition in his own words is,

a visually and operationally recognizable model of a specific prototype location, such as a yard, junction, industry, engine terminal, and so on. A scene that comprises elements of several familiar scenes or reminds one of a general region or type of railroad is not an LDE. It has to reflect the visual and operational characteristics of one actual location. The name can be changed, or even the structures (to some degree), but the physical layout cannot other than by the judicious use of selective compression. 2 email to author, dated XX/XX/XX

Operational Design Element
Generated from a series of conversations with Tom Pearson, an extension of the idea of an LDE could be an ODE, or Operation Design Element. Instead of striving to be an exact duplication of a prototype situation like the LDE, an ODE is an abstracted representation of a particular typology of a railroad’s operational situation (be it prototypical or free-lanced). An ODE is not necessarily directly representative of a specific prototype's location and situation, but it would be based on the practices of a particular railroad such as roadbed sections, color of ballast, signaling, sidings, etc.

Furthermore, it is a section of a model railroad that has a discrete (or particular combination of multiple) operating elements such as an interchange, siding, yard (or yard element), passenger station, industry spur or spot. The term can also be used for an identifiable type of landmark or scenery element such as a bridge, tunnel, cut, roadway or other part of the natural or built environment that affects operations. [Diagram XX]

What the combination of the ODE and the domino method makes possible is the ability to design a dynamic layout, or a layout that can be re-configured to meet a host of different operating possibilities. By using a standard position for track placement between modules like the FreeMo and Ntrak modular standards, one can create several LOEs using the same dimension domino module and reconfigure their arrangement to create different operating layouts without the need to relay track. This system is called the Dynamic Abstracted Modular Operating System, or DyNAMOS method of layout design.

There are several possibilities for taking advantage of the flexibility of dynamos. My own impetus for developing this idea comes from grappling with the necessity of “selective compression” in layouts juxtaposed with the desire to model an entire class one railroad, in my case, the Erie Railroad from New York City to Chicago. [Erie Schematic Map] With the re-combination of a set of dynammos that model a variety of typical main line situations of the Erie, one could model the entire length of the Erie by rearranging modules between operating sessions. Over the course of an extended period of time, it is possible to model the operations of the Erie’s flagship freight The Flying Saucer from Croxton Yard in New Jersey to Chicago over the entirety of the Erie main line all in a relatively small amount of square footage.

The “selective compression” of space becomes “selective sectioning” of space that is dynamically recombined across time to create an otherwise unmodelable scope of a large railroad system. In terms of operation, one could think of this as The Flying Saucer’s standing still as the layout moves beneath it since the train moves across the layout each session in the same direction. [Diagram XX]
One could also model different eras of the same portion of a railroad by merely dropping in the appropriate track arrangement for the given era. The double tracking of a section of the UP line in Cheyenne, Wyoming that took place in 19XX could be switched out to see how it affects operations or to match the modern equipment you have recently purchased.

The dynamos system could also facilitate modeling different railroads altogether. If one were interested in operations in New Jersey, for instance, one could model a multitude of railroads that connected to each other. If you were to take the area around the Erie operations in Croxton, New Jersey, there are several Erie branches and other railroads that connect o the yard. The Northern, Greenville Lake and Weehawken branches originate from Croxton, and along with the railroads of the DL&W, PRR, Northern, Susquehenna, NYCentral, NYO&W, LV, etc. there are plenty of tentacles that radiate from Croxton Yard to keep modeling new operations for many years while still remaining in the same immediate area. [Diagram XX]

Application
To make such a system manageable, one would need to use quick-disconnect cabling for power and DCC systems, a standard accessory arrangement for lighting, signaling, etc. and a construction method that allows for temporary, yet secure, placement of benchwork modules. One might look to the system under development by Ian Rice 3 that is attempting to standardize infrastructure arrangements, in his case so that one can reuse modules for completely new scenes and track arrangements. We would want a system that merely connected in a consistent and easily unplugable manner, and ideally would stack for convenient storage.

Construction out of lightweight materials would also be desirable for ease in handling. Metal and plastic structural systems could be used along with foam and other methods already employed by modular modelers.

For track configurations, one would need to generate a set of standard arrangements that were typical of a particular (or generic) railroad. A set might include: 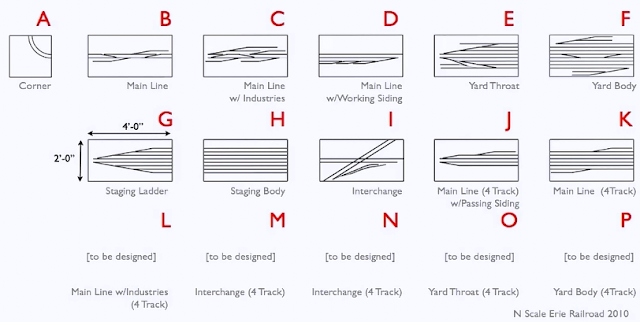 To keep the number of total dynamos relatively contained, one would need to make concessions on a few track arrangement issues. Whether a diverging route came off of the far or near side of the main, turnout orientation (trailing or facing), etc. An optimal number of modules would have to be arrived at considering storage space, concessions required, etc.
I'll update as this idea progresses. [See part 2]